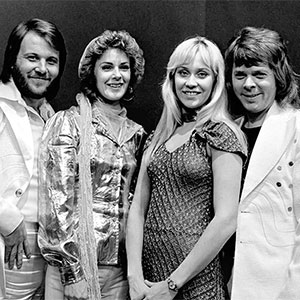 ABBA was a Swedish pop band, formed in November 1970 by two couples (Agnetha Fältskog and Benny Andersson, Anni-Frid Lyngstad and Björn Ulvaeus). The band’s name was formed by taking the initials of each of its members. ABBA’s first album, Ring Ring, was not a resounding success but the tides turned when they competed in the 1974 edition of Eurovision Song Contest and won, with their song, Waterloo. Their career was launched, celebrated by a salvo of singles, beginning in 1975 with Mamma Mia, the opening track of their self-titled album, ABBA. Next came Fernando and Dancing Queen. The latter – following in the footsteps of the disco wave - was featured on the album entitled Arrival. ABBA went on to enjoy a whole string of hits, notably 'Money, Money, Money', 'Knowing Me, Knowing You' and 'Take a Chance on Me'. The documentary entitled Abba - The Movie came out in 1977; it was such a huge success in the US that May 1978 was declared "ABBA month," with numerous promotional activities and a large billboard on Sunset Strip in Hollywood. The years that followed were spangled with similar successes despite rumors of separation: in 1980, Super Trouper, I Have a Dream and The Winner Takes it All shot to the top of the charts. This last single is instantly recognizable by its distinctive introduction on the piano. If you’re a pianist yourself, no matter your skill level, check out the piano score for The Winner Takes it All; we offer every level, from “easy” to “expert”… ABBA released their last album in 1981. Both couples divorced, creating great stress within the group’s ranks. This was reflected in the subsequent album, The Visitors, which no longer offered the magic of their former works. The band made its last public appearance on December 11, 1982 but their legacy lives on in their songs and a hugely successful, long-running musical appropriately named Mamma Mia! It’s the eighth longest-running show in Broadway history!

All sheet music
from ABBA