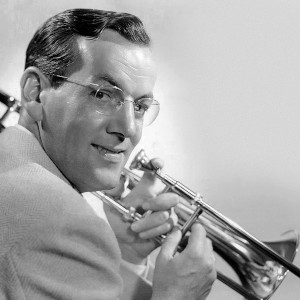 Trombonist, conductor and jazz composer, Glenn Miller is one of the most illustrious representatives of the American big band period during the 1930s and 1940s. A young trombone prodigy, he dropped out of school to devote himself to music and joined his first big band led by Ben Pollack, alongside the future great swing star, Benny Goodman. In parallel, he also composed arrangements for various orchestras. In 1932, he formed his own big band but it was not a success. It was not until 1938 that he became known to the general public thanks to the numerous radio broadcasts that showcased his new big band’s songs on a loop. 1939 was the year of his consecration. "Moonlight Serenade" was a sensation and their cover of "In the Mood" gained immense popularity. At that time, Miller multiplied concerts with his band and made his first steps into film. In 1942, he abandoned his big band and joined the US Air Force where he became a captain. He then conducted a military jazz orchestra that performed with the troops to cheer them up. On December 15, 1944, when he went to Paris to perform at the Olympia, his plane disappeared over the English Channel. He was 40 years old. Nevertheless, Glenn Miller's orchestra continued to exist after his death. His most famous works have been a huge posthumous success thanks to their revival in cinema, particularly in Woody Allen's films. Photo credit: Public domain - Image cropped for format needs

All sheet music
from Glenn Miller