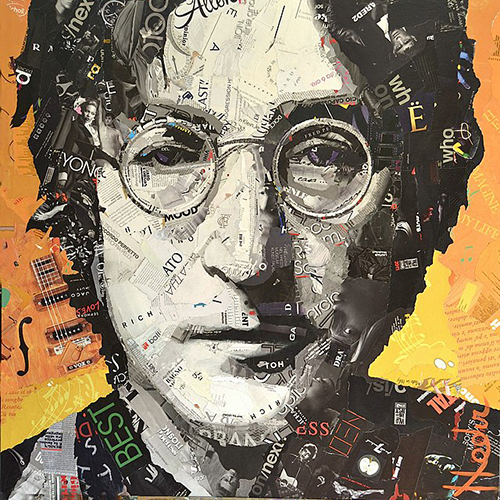 John Winston Ono Lennon, better-known simply as John Lennon, was born in Liverpool on October 9, 1940. He died, assassinated by Mark David Chapman, on December 8, 1980. His mother, Julia Stanley, gave him his first guitar and taught him to play the banjo when he was 15 years old. But it was when he discovered Elvis Presley that he fell in love with rock’n’roll and everything it represents. He even stated that had it not been for “The King,” The Beatles would never have come into being. At the tender age of 16, Lennon formed his very first band, Quarrymen. Just a few months later, he met Paul McCartney and, before long, the two were writing songs together. McCartney suggested to Lennon that they include George Harrison in the Quarrymen lineup; soon after, in 1960, Lennon decided to name his band The Beatles. Ringo Starr joined the group in 1962, as their drummer. Around this time, John Lennon’s wife Cynthia gave birth to their son, Julian – a surprise for fans, from whom Lennon had previously kept his marital status a secret, for image’s sake. The Beatles met with huge success for seven years, from 1963 to 1970, courtesy of a plethora of songs, including Let it Be, Hey Jude and All you Need is Love. He met Yoko Ono in 1966 and their relationship became official in 1968; their child, Sean Lennon, was born in 1975. After the Beatles’ break-up, John Lennon enjoyed a successful solo career, from 1970 to his death, in 1980. Key songs from this period of his musical career include Instant Karma, Happy Xmas, Woman, Jealous and, of course, Imagine (Noviscore provides the piano score for Imagine, enabling you to play this major Lennon hit at the skill level of your choice). Photo credit: Creative Commons Attribution-Share Alike 4.0 ©Nadir Nardiello - Image cropped for format needs

All sheet music
from John Lennon