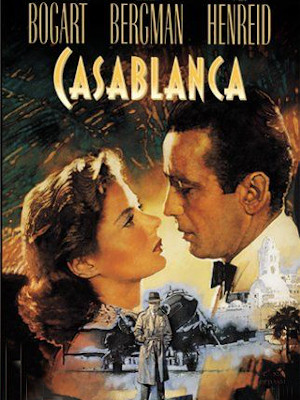 Casablanca is an American film released in 1942. It is one of the greatest monuments of American cinema. Its success rests mainly on the charismatic duo of actors Humphrey Bogart and Ingrid Bergman, true icons of the time. Their presence in the film largely explains the influx of the public as soon as it was released. In addition to its triumphant reception, it won three Oscars in 1944, including Best Picture. Note that the soundtrack of the film is directed by Max Steiner who is none other than the genius composer who wrote the theme for Gone with the Wind. The soundtrack is a key player in the film since it is based on the whole flashback of the romance between the two characters. We especially remember the titles As Time Goes By interpreted by the actor and jazz singer Dooley Wilson and La Marseillaise. In 2004, As Time Goes By is ranked 2nd among the greatest songs in American cinema after Over the Rainbow. It is this title and the soundtrack as a whole that explains the universal success of Casablanca over the decades.

Our music sheets of the film
Casablanca