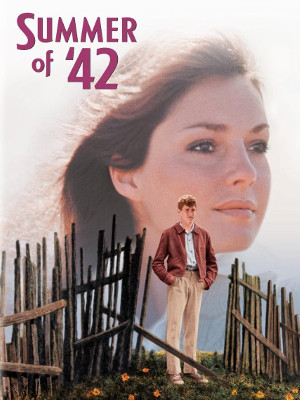 "Summer of '42" is a 1971 American film adapted from the memoirs of writer Herman Raucher and directed by Robert Mulligan. Nominated four times for an Oscar, he was awarded the prize for Best Film Music in 1972. Following the success of this dramatic comedy, Herman Raucher published a novel of the same name which became a national bestseller as well as the best-selling book in the United States between 1971 and 1974. It tells the story of a 15-year-old boy who comes to spend his summer holidays on the island of Nantucket with his two friends. It is 1942 and the Second World War rages a few thousand kilometres away... The three friends are in the delicate early stages of adolescence and have only one thing on their minds, girls. But if Oscar and Bernard are especially interested in girls their own age, Herbert falls madly in love with a woman twice his and whose husband, a soldier, has gone to war. They maintain a platonic relationship until the day Dorothy receives a telegram from the government informing her of her husband's death. That evening, the devastated young woman is comforted by Herbert and she succumbs to the charm of this innocent young man. The day after this unforgettable night of love, Herbert goes to Dorothy's house but finds the house empty and a note left for him by the young widow. She hopes that he will understand her decision and keep a wonderful memory of their meeting, but above all she hopes that he will achieve true happiness and be spared the senseless tragedies of life... To a sweet and bitter music wonderfully orchestrated by theFrench composer Michel Legrand, Herbert tells sadly how he never saw Dorothy again or even knew what had become of her. A moving and nostalgic film made famous by this most melancholic of soundtracks by Michel Legrand.

Our music sheets of the film
Summer of '42