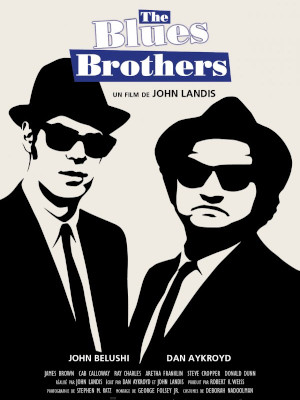 "The Blues Brothers" is an American comedy released in 1980. and is the work of director John Landis. The star actors in this cult film are none other than singers John Belushi and Dan Aykroyd, key members of "The Blues Brothers", a group created from scratch for NBC's "Saturday Night Live". Produced as a parody, the film recounts the incredible adventures of two delinquents, just out of prison, who try everything to save the orphanage in which they were raised from ruin. To do this, they work to rebuild their old rhythm and blues group in order to raise the 5000€ necessary for the survival of the orphanage. This musical sketch features a cast of stars and features some of the greatest rhythm 'n' blues artists of the time, from Aretha Franklin to James Brown and Ray Charles, performing three of the lead roles and lending their voices to some of the most beautiful songs in the soundtrack. When it was released in 1980, the film was a hit and became one of the most famous musicals in American cinema.

Our music sheets of the film
The Blues Brothers