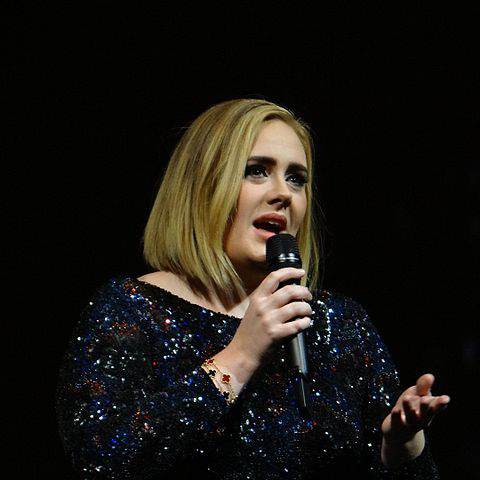 Adele (full name Adele Laurie Blue Adkins) is a British singer/songwriter, born in London on May 5, 1988. She took the musical world by storm when she released her two singles Rolling in the deep and Someone like you. At the tender age of 4, Adele was already crazy about music and admits having been a fan of Spice Girls and Destiny’s Child. Although her childhood was peppered with the success of various Girls Bands, Adele admired other, more classic, singers such as Ella Fitzgerald and Etta James. Her interest in music management prompted her to attend BRIT School, an educational institution specializing in performing arts and technology, in South East London. It wasn’t long before Adele was picked up by XL Recordings record label, on the strength of her outstanding vocal talents: in fact, all it took was for a classmate to post a video of Adele performing a song on MySpace! Her first single, entitled Hometown Glory, put her in the public eye in 2007. The following year, she won the “Critics’ Choice” award at the Brit Awards ceremony. Adele underwent vocal cord surgery then went on to record Skyfall, in 2012. This title track from Sam Mendes’ James Bond saga of the same name earned Adele an Oscar for “Best Original Song.” The Skyfall single was such a worldwide success that it is covered by many a musician across the globe. Several well-known artists, including Belgium’s Stromae have expressed a wish to co-write with this awesome songwriter from the English capital. Look for the online piano sheet music and learn how to play this song for your own personal pleasure! Adele’s album, entitled 19, was a huge hit, selling 2.8 million copies worldwide. The singer also received a Grammy Award for “Best New Artist” in 2009. Her subsequent album, 21, released in 2011, confirmed this young artist’s amazing talent, appropriately rewarded by a double platinum certification (more than 600,000 copies sold). Her latest album, 25, was released on November 20, 2015 and includes her recent best-selling single Hello which has already achieved international acclaim. Photo credit: CC BY-SA 4.0  ©Kristopher Harris  - Image cropped for format needs

All sheet music
from Adele