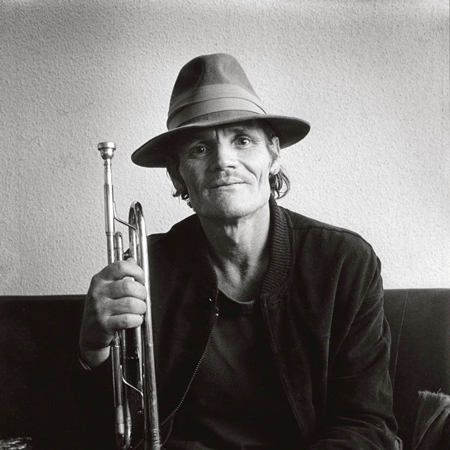 Chesney Henry Baker, better known as Chet Baker, was an American jazz trumpeter and singer, born in 1929 and who tragically died in 1988 after excessive drug use. Nicknamed the James Dean of jazz, he enjoyed dazzling success before descending into hell. His father, a professional guitarist, passed on his passion for music at an early age and introduced him to the trombone. But the young Chet, who had trouble taming the instrument, exchanged it very quickly for a trumpet. A new calling was born... Chet made his debut with the Glendale School Orchestra and was inspired by his idols, trumpeter Harry James and saxophonist Lester Young. After military service, he joined the army and discovered Bebop. Back in civilian life, he continued his studies at El Camino College in Los Angeles where he studied music history and harmony, but a broken love affair prompted him to make a new commitment before being discharged for unsuitable behaviour in military service. In 1952, he performed in jazz clubs and began a tour with saxophonist Charlie Parker before joining Gerry Mulligan's group in 1953. The two musicians worked perfectly together and quickly became very popular, thanks in particular to Chet Baker's memorable solo on "My Funny Valentine", which became a worldwide success. The same year, the singer faced his first arrest for drug possession and was sentenced to six months in prison with a suspended sentence, while Mulligan was sentenced. The group was forced to split up. Baker then released his first album "Chet Baker Sings" which propelled him to the rank of icon and earned him the coveted title of Trumpeter of the Year. Surfing on the wave of success, he left to conquer Europe in 1955 and signed a contract with the French label Barclay. On his return, he recorded several records with saxophonist Hart Pepper but his drug addiction became dangerous because of his daily use. A new trip to Europe from 1959 to 1964 was marked by scandals and he was imprisoned several times in Italy and Germany for possession of narcotics. When Chet Baker returned to America in 1965, his popularity soared. A long period of downturn in his life then began and he was unable to get out He was violently assaulted by a gang of dealers and got away with it with broken teeth and a broken jaw. Playing the trumpet then became a torment. In the 70s and 80s, he toured Europe and the United States, but his success was no longer evident despite the warm welcome of the critics. On May 13, 1988, he died falling out of his hotel room window after consuming a significant amount of heroin and cocaine.
Photo credit: Creative Commons Attribution-Share Alike 3.0 ©Michiel Hendryckx - Image cropped for format needs

All sheet music
from Chet Baker