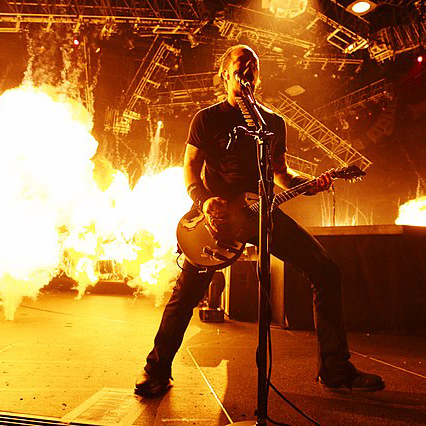 Metallica, an American heavy metal band founded in 1981, is a reference to its musical genre. It was James Hetfield and Lars Ulrich who launched the band, which is now made up of its two founding members as well as Kirk Hammett, who arrived two years later, and Robert Trujillo, a member of Metallica since 2003. He replaced Jason Newsted, who himself had taken the place of Cliff Burton, who died in 1986. In their 35-year career, this heavy metal band has released no less than 11 studio albums and 4 live albums. In 1983, they released their first album, Kill 'Em All, which was originally supposed to be called Metal Up Your Ass, but the name didn't go down well with the band. But it was Metallica's third album, Master of Puppets, that really began to put the band on the map and establish them as a staple in the heavy metal world. The album reached number 29 on the Billboard 200 and stayed on the charts for 72 weeks. It was even certified as a gold record at the end of 1986. In 1988, Justice for All, the first album following Cliff Burton's death, reached number 6 on the Billboard 200, followed by hits such as Nothing Else Matters, Enter Sandman, The Unforgiven, Until It Sleeps and I Disappear. Metallica has won 9 Grammy Awards and sold over 200 million records worldwide. In 2012, Metallica decided to found its own label, Blackened Recordings, and thus acquire all the rights to its studio albums. Photo credit: CC BY-SA 4.0  ©DallasFletcher - Image cropped for format needs

All sheet music
from Metallica