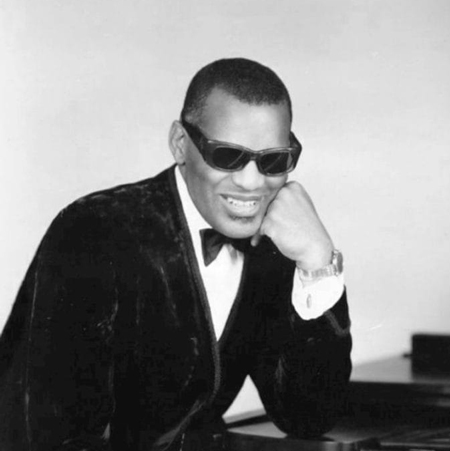 Ray Charles Robinson was born on September 23, 1930 and died on June 10, 2004. Singer, composer, arranger and pianist, Ray Charles was an all-rounder who excelled in a wide variety of styles, from jazz to rhythm and blues, gospel and country. He was also one of the pioneers of soul music. Ray Charles was first trained in classical music before making his name in the early 1960s in a more bluesy universe. Georgia on My Mind, Hit the Road Jack and Unchain my Heart are some of his great tracks that have left their mark in music, both by their melodies and by their recognizable voices. And Ray Charles' talent was all the more recognized as he had been blind since the age of 7. On the strength of his success, Ray Charles decided to set up his own production company, Ray Charles Enterprises. After a period of inactivity, particularly due to drug addiction problems, he returned in the second half of the 1960s with Let's Go Get Stoned. He then became more discreet and was one of the singers for We Are the World, as well as a duet with Chaka Khan in 1989. Nevertheless, he sang to sold-out audience all over the world for years and released dozens of albums. Ray Charles received no less than 12 Grammy Awards during his career and his song Georgia on My Mind has, quite simply, become the USA state of Georgia's anthem.
Photo credit: Public domain ©William Morris Agency - Image cropped for format needs

All sheet music
from Ray Charles