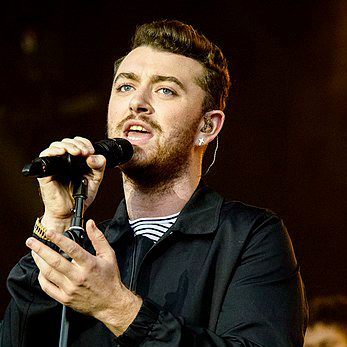 Samuel Frederick Smith, better known as “Sam Smith,” was born on May 19, 1992, in London. He was part of Youth Music Theatre UK, sang in various jazz bands and was a member of Bishop's Stortford Junior Operatics and Cantate Youth Choir. He shot to fame when he was featured on Latch, a single by Disclosure which climbed to #11 on the UK Singles Chart after its release in October 2012. In the wake of this success, Sam Smith released a single, Lay Me Down, from his debut album, but it did not get very far. Undeterred, he collaborated with Naughty Boy on their single La La La released in May 2013. This one got to Number One in the UK! Smith then brought out an EP, entitled Nirvana, in the summer of 2013. His debut studio album, In the Lonely Hour, followed, featuring singles Stay with Me and Money on my Mind, which both became #1 hits in the United Kingdom. Possibly equally notable are singles I'm Not the Only One and Leave your Lover, a soulful track reflecting the singer’s own personal experience in love. For this singer-songwriter, 2015 has been a milestone – the year in which he began his first world tour (In The Lonely Hour Tour) and in which he was awarded 4 Grammy Awards and 2 Brit Awards. In October 2015, Smith released Writing's on the Wall, (currently available on our French site in do, re, mi format) the theme for the James Bond film, Spectre; Smith received a Guinness World Record when it became the first Bond theme song to reach number one in the UK. If you appreciate Sam Smith’s charisma and vocal talents, you're bound to enjoy playing our Sam Smith Stay With Me piano sheet music.

All sheet music
from Sam Smith