All sheet music from
Simon & Garfunkel 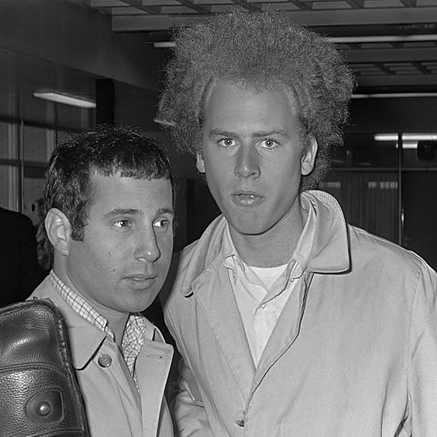 Simon & Garfunkel Paul Simon and Arthur Garfunkel met for the first time in 1953. Simon was a singer/songwriter and guitarist and Garfunkel was a vocalist. They brought out their first song, Hey Schoolgirl, in 1957, under the name of Tom & Jerry. Despite this successful launch into the music business, the duo chose to pursue their respective studies at that time. But in 1963, they signed a deal with Columbia for Wednesday Morning, 3 A.M., an album that featured the now-famous The Sound of Silence (you can find the piano score for The Sound of Silence here). The album was a flop and Simon decided to take off to England to work on a solo career. Two years later, a new rendition of their successful song came out on the radio and captured audience attention. This prompted the duo to reform. In 1966, they released their second album, appropriately entitled Sounds of Silence, a compilation of 11 folk rock tunes. The following year, they had the honor of composing many of the songs featured in the famous Hollywood movie, The Graduate, including the unforgettable “Mrs. Robinson.” They attained worldwide success in 1968 courtesy of their subsequent album, Bookends. Simon and Garfunkel split in 1970 following the release of their album Bridge over Troubled Water, containing the renowned eponymic title along with Cecilia and El Cóndor Pasa. Despite their differences, the two artists got back together on several occasions, one of them being a performance in support of George McGovern, in 1972. Their respective careers falling below par in the 1980s, the two artists made another go at it but finally recanted, unable to see eye to eye. Photo credit:  Creative Commons Attribution-Share Alike 3.0 nl ©Joost Evers, Nationaal Archief, Den Haag, Rijksfotoarchief: Fotocollectie Algemeen Nederlands Fotopersbureau (ANEFO), - Image cropped for format needs