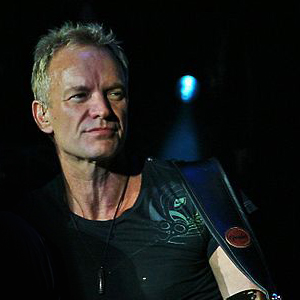 Gordon Matthew Thomas Sumner is better known by his iconic stage name: Sting. Born October 2nd, 1951, this musician has known two musical lives. The first began in 1977, when he met Stewart Copeland and Henry Padovani and they went on to form the incredibly successful rock group The Police (shortly after, Padovani was replaced on the guitar by Andy Summers). The group had an eight-year run in which they dominated the charts with such hits as Roxanne, Can't Stand Losing You, Message in a Bottle and Every Breath You Take. Sting decided to launch his solo career in 1985, with a début album named The Dream of the Blue Turtle, featuring the notable tune Russians. He embarked on his first solo tour. His second album, released two years later, brought with it the single Englishman in New York, which went on to be a huge hit. From 1991 to this day, Sting has released no less than 10 studio albums. Among his many hit singles, some of the better-known ones are Shape of My Heart, If I Ever Lose My Faith in You, Fields of Gold and, of course, It's Probably Me. In addition to his fruitful musical career, Sting has used his celebrity to help various causes. He contributed to the creation of the Rainforest Foundation, dedicated to the protection of the Amazon forest. He also participates in charity concerts to help further various causes that are close to his heart. Although he’s less known for his work as an actor, Sting has nevertheless appeared in approximately twenty films and TV shows! Photo credit: Creative Commons Attribution 2.0 ©paveita - Image cropped for format needs

All sheet music
from The Police