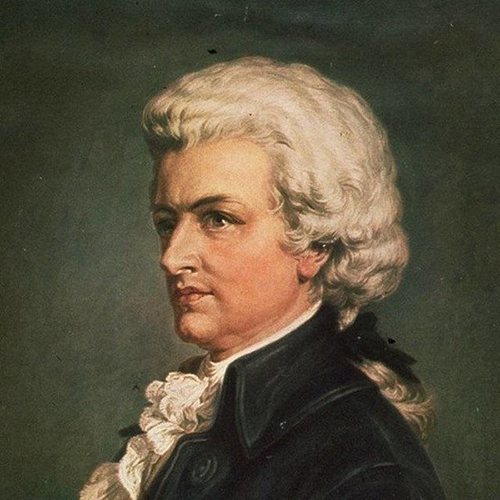 Joannes Chrysostomus Wolfgangus Theophilus Mozart, better known as Wolfgang Amadeus Mozart, was an Austrian composer born on 27 January 1756 in Salzburg. He distinguished himself at a very young age by his virtuosity at the piano and violin... From the age of 3, W.A. Mozart showed great ability for music. A true virtuoso of the piano and violin, he worked under the guidance of his father, who was also a musician. At the age of 5, W.A. Mozart played his first minuets. His father then took him round Europe (France, England, Italy...), travels that enabled him to discover a variety of music styles. At the age of 11, the young prodigy composed his first opera "Apollo und Hyacinthus". When he was only 12 years old, he added 2 other operas to his repertoire. In 1773, while in the service of Prince Archbishop Colloredo, W. A. Mozart suffered the tyranny of the latter and sought another employer. He then went through a bad time and was forgotten for a year. 1782 was the new beginning in his career: Emperor Joseph commissioned Mozart to write an opera in German which resulted in new-found fame. Mozart later composed great arias such as "The Turkish March" or "Ave Verum Corpus". Discover our piano sheet music of a variety of Mozart’s compositions below and reproduce for yourself his enchanting melodies. This great composer, who left his mark on classical music, died at the age of 35 in the city of Vienna on December 5, 1791. Photo credit: ©Public domain - Image cropped for format needs

All sheet music
from W.A. Mozart